When looking at the causes of overeating, taking a psychological approach with hypnosis deals with the hidden causes deep in your unconscious mind. 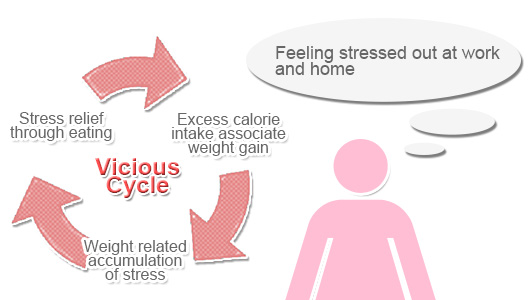 Stress can indirectly cause overeating through the stress causing an increase in the supply of a hormone called cortisol which can lead to increased heart rate and blood flow, similar to a mild adrenaline rush. Sometimes this stress response can then cause increased appetite which is based on the body feeling that it needs more fuel to supply the increased metabolic activity caused by the cortisol.


So while there is indeed a physical "cause," that physical or metabolic process is initially set in motion by some form of psychological and/or emotional stress.


If stress is only experienced fairly infrequently then it can in fact lessen appetite temporarily. In these circumstances the hypothalamus in the brain produces hormones that can decrease appetite.


However if stress or pressure of some kind is more on going and persistent then levels of cortisol also tend to increase and remain at an elevated level, subsequently causing an increase in appetite.


It's also been established that stress can influence the kind of food choices that you make. Research has shown that when your stress level is persistently elevated there is a tendency to increase intake of food with high sugar and fat content. These kind of foods have the temporary effect of lowering stress, hence the term "comfort" food, but this then leads to increased psychological dependency on these high fat and sugar foods thereby underpinning the stress factor. In conjunction with this, stressed people tend to exercise less and sometimes drink more alcohol, also contributory factors in weight gain.


When someone with a habitual eating disorder consumes a large amount of food they often feel a sense of satisfaction, even mild euphoria. This is due to the effect of the temporary stress reducing hormones released into the metabolism, the "comfort" food factor. They are released temporarily from the psychological and emotional effects of the underlying stress that they're living with and it is this which sustains and maintains their psychological addiction to overeating.


Periodic attempts to undertake diet regimes usually fail because the self denial of the food "high" leads to feelings of frustration and depression which sooner or later wins over the desire to stop overeating, the will to persist collapses and a return to habitual overeating becomes inevitable, and the whole cycle begins again. ~parts adapted via Self-Hypnosis-Is-Key.com

Causes of Overeating:
Listen to Your Body

Eating is a fundamental pillar of life for all humans. Moreover, most of us enjoy it, especially when it's some great tasting food! Unfortunately, we also don't always have the best sense of when to stop, especially, in our current time when we have access to not only good-tasting foods but in immense quantities.

While we may poke fun at humorous situations such as Homer Simpson eating until he can't physically move, in reality the consequences of eating too much can range from a simple mild stomach ache in the short term to the many health risks associated with chronic obesity such as cardiovascular disease or diabetes.

Moreover, often overeating is not as dramatic as eating until our pants are about to burst, but rather simply eating more than we need at the current time, or eating until we're full rather than eating until we've gotten the nutrients we need.

We do not have the natural constraints our ancestors did to prevent us from over eating. In evolutionary terms, most humans couldn't over eat as large-scale agriculture and food processing generally weren't available until fairly recently in human history. Currently, most humans and certainly Americans have access to more food with convenience than ever before.

So, what drives us to eat more than we need?

Despite the plethora of available resources, we are still fully capable of eating what we need. One key insight is the emotional connection to food many people have. Research has shown that many people tend to eat more or overeat when they are feeling sad, depressed, or struggling with an issue.

A study in the Journal of Adolescent Health, researched the eating habits of adolescents who eventually developed eating disorders like binge eating. The primary result they found was "These results indicate that it is important to consider depressive symptoms in overeating." One of the primary signs that we may be eating too much is to monitor the reason for eating. Are we eating because we are hungry, or because of an emotional issue, we are dealing with?

Another consideration is symptoms of Hypoglycemia, or low blood sugar. An article from the Medical University of Warsaw stated that Hypoglycemic symptoms can lead people to eat more in order to satisfy urges to increase insulin, thus it is always important to remember to practice moderation when eating sweets as they lead us to eat far more than we actually need.

Finally, there is no better warning system than your own body. Excessive constipation, blockage, bloating, vomiting or stomach aches is your body giving you feedback that it has had enough. More often than not, if you feel a constant need for laxatives or antacids it is most likely your body telling you that you've taken in far more food than you need. Additionally, your body's energy level and mental alertness are signs of eating too much. While we all enjoy a finely cooked meal or delicious snacks, biologically speaking food is simply fuel for our body to consume and turn into energy. However, when we bog our system down with excess fuel or fuel of poor quality A.K.A junk food, our energy will decrease, we feel sluggish and less alert and rather than increasing our energy, it will feel like we decreased it as we overloaded our digestion system.

I think I speak for most people when I say that we love food! Our bodies love food as well as it is the energy that allows it to move and function, however when we have too much our best warning system is our body and our brain telling us.

Our brains tell us through our emotions, we very often have far more food than we need for emotional reasons such as depression or stress.

We have to be aware of our current state to avoid these pitfalls. In addition, our bodies tell us through our own energy levels and digestion system when we've had too much. The signs are there and our brains and bodies are telling us, we just have to listen!

Self-hypnosis can provide the extra motivation and determination to keep you moving in the direction of your goals, and help you escape the many food traps that can cause weight gain.

The aim of using hypnosis for weight loss is to re-educate your unconscious mind - the part that creates cravings and impulses - to give you back real choice in what you eat. You know that a real and permanent change in your weight only comes with a change in lifestyle, not through fad diets that you can't possibly keep up over the long term. Our weight control hypnosis downloads can help you make those changes.

Why is hypnotherapy so much more effective than just dieting alone at tackling your causes of overeating? Because it lifts you out of a double bind, or Catch-22. On the one hand, faddy dieting and unnatural calorie restriction actually causes your body to store fat more effectively, and create cravings for high-calorie, unsatiating foods. In addition, feeling "deprived" on a daily basis is eventually going to drive you to bingeing and rebellion, no matter how strong your self-control. In short, hunger always wins in the end.

Break the patterns and causes of overeating.  Take control of your hunger and weight!

Ready to take charge of your eating? Retrain your thinking about food and the causes of overeating with...

Take Charge of Your Health and Tackle the Causes of Overeating