Iron Benefits: Everything You Need to Know

Iron benefits are undeniable. This is a vital mineral for a healthy body and mind. Iron is an essential mineral responsible for many functions in the human body. From sustaining healthy skin, hair and nails, as well as working to produce adenosine triphosphate (ATP; the body's main energy source), iron is one mineral we can't live without. But it may be the fact that it's the main carrier of oxygen throughout the human body that makes it most essential. Too much or too little can wreak havoc on your health. 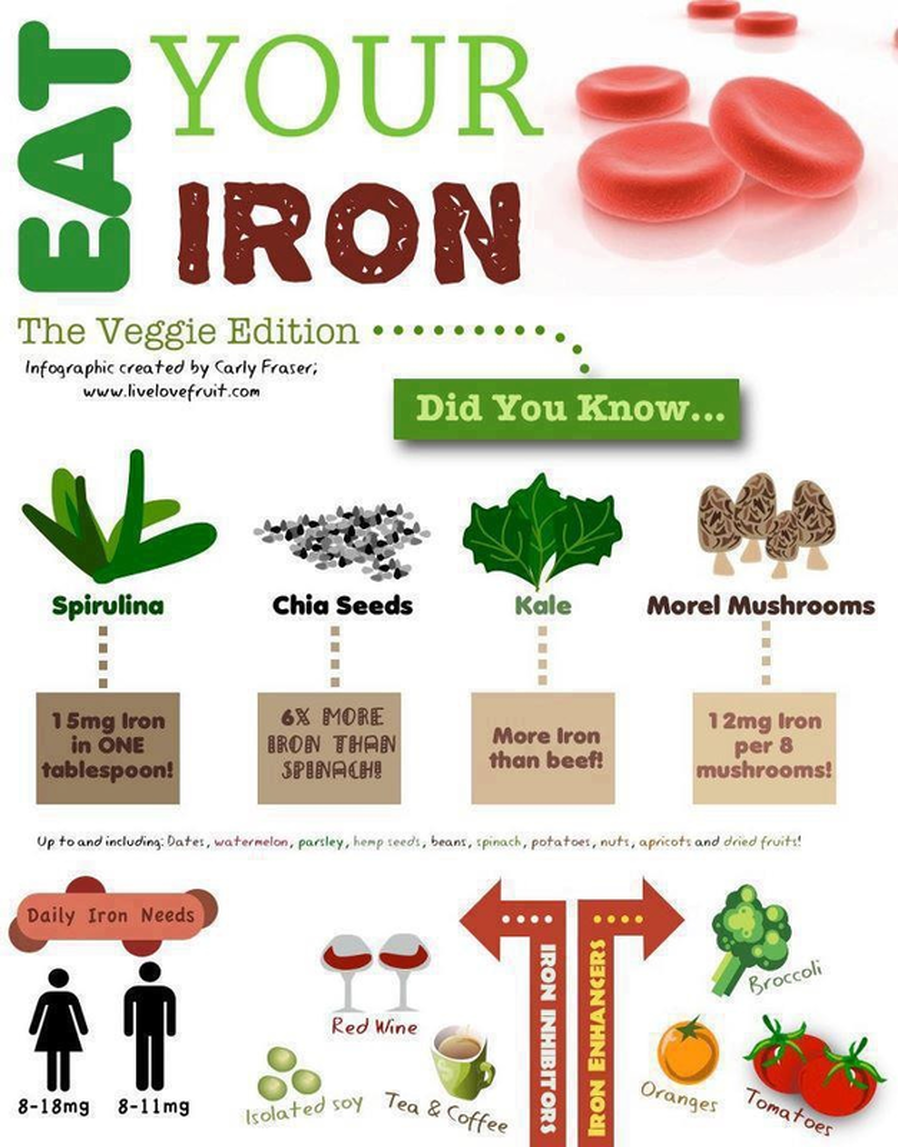 Iron Benefits:
What Happens When You're Lacking

Hemoglobin mainly consists of nearly two-thirds of iron found in the human body. Hemoglobin is a substance found in red blood cells and is responsible for carrying oxygen from the lungs and transporting it throughout the body.

"If you're not getting sufficient oxygen in the body, you're going to become fatigued. That exhaustion can affect everything from your brain function to your immune system's ability to fight off infections. If you're pregnant, severe iron deficiency may increase your baby's risk of being born too early, or smaller than normal, says Paul Thomas, EdD, RD, a scientific consultant to the National Institutes of Health, Office of Dietary Supplements.

If you're anemic, you may have the following symptoms:

Formation of hemoglobin is the chief function of this mineral. Not only that, since it is a part of hemoglobin, it aids in transporting oxygen to the body cells as wells. Additional hemoglobin is vitally important because human beings tend to lose blood in various ways, through injuries, both internal and external. Most notably, women lose considerable amounts of blood every month during their menstruation years,  which is one of the major reasons why women are more likely to suffer from anemia than men.

It is a vital element for muscle health. It is present in the muscle tissues and helps provide the supply of oxygen required for contraction of muscles. Without it, muscles lose their tone and elasticity; muscle weakness is one of the most obvious signs of anemia.

Increased development of the brain is also one of the many benefits of iron. Since oxygen supply in the blood is aided by iron and the brain uses approximately 20% of the blood oxygen, it is directly related to brain health and its functions. Proper flow of blood in the brain can stimulate cognitive activity and help create new neural pathways to prevent cognitive disorders, such as Alzheimer’s disease, so iron intake and its subsequent brain oxygenation is essential.

Iron deficiency is one of the causes of the restless leg syndrome. Low level of it in the blood is a major cause of the condition, so proper intake of its supplements in required levels as per the doctor’s recommendations can cure this problem. This is connected to muscle spasms, which can be one of the symptoms of its deficiency.

Iron is an important facilitator for regulating body temperature. An interesting fact is that it has the ability to regulate itself as per the absorption capacity of the body. Keeping the body temperature stable means that the enzymatic and metabolic functions can happen in their most optimal and efficient environment and temperatures.

One of the most important health benefits of iron is that it acts as a carrier of oxygen and thus participates in transferring oxygen from one cell to another. This is a vital function of iron, as oxygen is required by each and every organ system to perform routine functions.

Iron is helpful in the treatment of a severe disorder called iron deficiency anemia, which results from a lack of it in the human body. This is where most of these health benefits come from, as a result of preventing this terrible disease that affects millions of people around the world. Anemia is the most common nutritional deficiency on the planet.

Iron also helps in the treatment of chronic disorders like renal failure anemia, and other chronic diseases of the intestinal and excretory system. These are not related to blood necessarily, like most other iron functions, but it is still a key part of many necessary processes throughout the body’s systems, not just the circulatory system.

Iron may also exhibit its health benefits in curing anemia that occurs in women during pregnancy or menstruation. New red blood cells must replace those that have been lost, so consuming significant amounts of it is necessary for women at those points in their lives.

It actively takes part in the synthesis of a number of essential neurotransmitters like dopamine, norepinephrine, and serotonin. These chemicals play a major role in different activities involving neurons and the human brain.

It is suggested by health experts that iron is capable of treating another form of anemia called predialysis anemia. However, it is a good idea to consult a medical expert as it can be very complicated and dangerous.

Health benefits of iron also include the elimination of unexplained or chronic fatigue, which may occur in both men and women. Its deficiency is a natural cause of fatigue since it is an important component of hemoglobin.

Iron plays a key role in providing strength to the immune system. Thus, the body is made proficient enough to fight against a number of diseases and infections. Red blood cells are necessary for providing oxygen to damaged tissues, organs, and cells. Without it, there would be no hemoglobin; without hemoglobin, there would be no oxygen. The healing process needs this essential nutrient to happen.

It is an important participant in energy metabolism in the human body. This process is how energy is extracted from the consumed food and subsequently distributed to different body parts.

It is useful in treating insomnia and it improves the sleeping habits of people by regulating their circadian rhythms. Proper red blood cell count can also result in less fluctuation of blood pressure, which can often keep people awake at night.

Iron, when consumed in sufficient amounts, can help improve concentration and boost the cognitive performance. An increased flow of blood to the brain is what results in this important benefit. ~parts adapted via OrganicFacts.net

How to Get More Iron

Iron can be found in a variety of foods, some meat-based (known as heme), while others are plant-based (nonheme). Here are some examples:

The problem lies not in what you eat, but in how well your body absorbs nutrients, and iron can be tricky. The absorption of iron can be affected by several factors. Even though most foods contain nonheme iron, it's heme iron that gets absorbed easier in the body. Additionally, most healthy adults absorb about 10 - 15% of the iron they ingest.

Those at most risk of iron deficiency are athletes who train frequently and at high intensity. Vegetarians may be at risk because their diet may lack in iron-rich foods. Also at risk are:

There are ways to boost your body's absorption of iron. For example:

On the other hand, if most of your foods contain nonheme iron, it's better to decrease your intake of drinks that contain tannin, such as coffee, tea and wine, because they further decrease the absorption of iron.

The daily recommended allowance is as follows:

An interesting fact about iron is that infants are born with a 6-month supply which means they require less amounts than adults. As we grow and develop, the lifestyle choices we make concerning food affect how our body absorbs and benefits from iron. But the importance of this mineral cannot be stressed enough, mainly because lack of it causes a slew of serious health problems.

Take a good look at your diet, see which foods you'd like to add more of or do without all together. Another good tip is to make sure your food combinations enhance the absorption of iron, rather than diminish it.

If you feel like you may be iron deficient, talk to your doctor about getting a blood test and a supplement that helps replenish iron levels.

Ad a healthy dose of IRON to your life...